Big Sable Point Lighthouse sits midway on Lake Michigan’s eastern shore near Ludington, Michigan. On the National Register of Historic Places, the lighthouse was built with state funds in 1867 to guide mariners through a treacherous stretch of the shoreline, where twelve ships wrecked in 1855. In 1968, a century of light-keeping ended at Big Sable when the station was automated.

The Michigan Department of Natural Resources owns the lighthouse, and the Sable Points Lighthouse Association operates the station, which is open to the public. You can access the 2-mile trail to Big Sable by paying the entrance fee to Ludington State Park. You can either hike or bike on the trail.

We thought the trail, which parallels Lake Michigan, would allow us to see the lake during our hike. Not so. The trail lies in a trough between two dune ridges. The foredune, which runs adjacent to the beach, entirely blocks the view of the lake, but designated side trails allow you to scramble up the dune for a lake view. While we stayed in the trough, the trail offered lessons in dune ecology that kept us interested during the entire hike.

Colorful interpretive signs identified features unique to the dunes, as well as the plants and animals able to live in the dunes’ extreme environment. For instance, we learned that the existence of ponds in the trough depends on Lake Michigan water levels. The ponds provide habitat for Fowler’s toads and tadpoles. In the dry sand habitat, plants like hoary puccoon and beach pea thrive, and critters like the wolf spider and the sand digger wasp create homes.

You’ll know you’re nearing your destination when you see the 112-foot, white-and-black-banded light tower poking above the dunes. Big Sable presents a charming sight with its red-roofed, white cottage and tall light tower still providing a beacon for ships on Lake Michigan.

If you go, give yourself plenty of time to explore when you reach the lighthouse. You can swim a nearby beach and tour the light station, which, be warned, contains a gift shop.

This was the first station constructed in this area.  The Ludington North Breakwater Light in Downtown Ludington guides the vessels through the channel connecting the harbor, Pere Marquiette River and the mighty Lake Michigan. 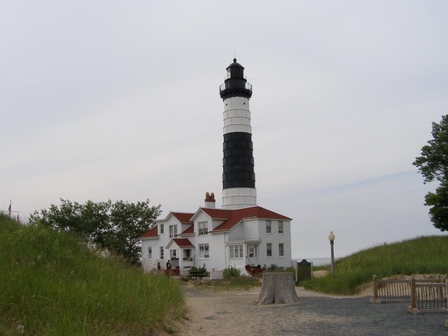 The funding of $35,000 was appropriated for the lighthouse in 1865 during the presidency of James Buchanan.  The 112 ft tower, constructed of Milwaukee cream city brick was erected near the edge of the sandy point.  It was first put to work on November 1, 1867.  It is said that on that night mariners as far away as 19 miles out on the lake saw the constant white light.

The keeper’s dwelling was large enough to accommodate two families.  The dwelling included a full basement.  The house was attached to the tower by an enclosed passageway in which the keeper’s office was located.  In 1908 a fog signal building and brick oil house were built nearby.

The lake climate made the brickwork of the tower begin to flake.  In 1898 it was reported that something needed to be done to save the tower and in early 1900 the building was encased in iron plates and cement was poured between the plates and brick to keep it from further deterioration.

In 1949, Big Sable was the last of the Great Lakes lights to be electrified.  In 1953 electrical lines were finally extended to the light station.  Automation of the light eventually eliminated the need for a keeper and the last civilian keeper retired in 1969.  The light station continued to be staffed by the US Coast Guard until 1972.

Erosion of the shoreline has always been a problem at Big Sable Point. By the early 1940s, the lake was so close that a fog-signal building washed away. In 1943, a seawall was built to help control the problem. But after the station was automated, the unmanned and virtually abandoned property deteriorated further. In 1977, the seawall was breached and waves came within four feet of the tower before the seawall could be replaced. The original seawall constructed in the 1940s was repaired and extended both to the north and the south. Rip-rap is still placed periodically on the outside of the seawall to slow further erosion.

The original Fresnel lens was removed due to vandalism in 1985. It was restored and is now on exhibit at the nearby Historic White Pine Village. The Fresnel lens at the lighthouse was replaced with a 300mm plastic lantern which still shines proudly across the Lake Michigan shoreline.

To get to the lighthouse you follow the signs from Ludington to the Ludington State Park.  There you will want to park in Beach Cafe’s lot and walk north on the beach for 1.5 miles.  You can park in lot just north of the main gate and walk or bike the 1.5 miles on the lighthouse service road which you enter from the Pines campground but DO NOT park in the campground.  Bus transportation is available the third Saturday of July, August and September only.  The bus schedule is from the State Park Visitors Center to the lighthouse between 10 am and 4 pm.  Round trip cost is $2 per person or a maximum of $10 per family.

Open May through October.

In the town of Ludington, you can also visit the North Breakwater Lighthouse by walking to the end of the breakwall from Stearns Park. From the lighthouse, you can wave to passengers on the deck of the S.S. Badger, the only coal-fired steamship in operation in the United States.